The Sharp Building Sold for Over €56.3m 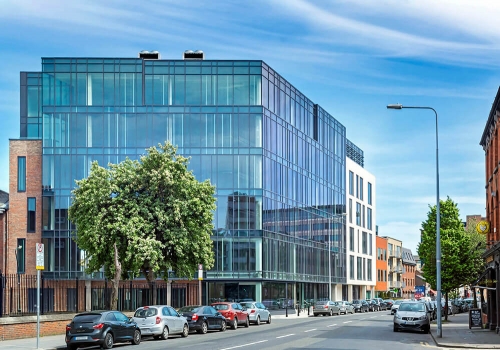 Little more than 12 months after demolishing a dated Victorian-style office building at Hogan Place in Dublin’s south inner city and replacing it with a new-generation block, developer McGarrell Reilly Group has sold the investment at a significant profit to an unnamed institutional investment fund advised by Credit Suisse.

The €56.3 million selling price agreed for the newly completed Sharp Building will come as a surprise even in the present buoyant market dominated by aggressive overseas funds. The €2.7 million rent roll to apply to the building will give the new owners a net yield of about 4.4 per cent.

The building is named after George Sharp, the 19th-century portrait figure painter who resided in Hogan Place.

The six-storey, over-basement, grade A office building extends to 4,412sq m (47,500sq ft) and includes a 209sq m (2,250sq ft) coffee shop let to the Art of Coffee. The basement car park has 40 spaces along with parking for 56 bicycles and clubhouse-standard showers with changing facilities.

The block has been pre-let to Perrigo, a leading global healthcare provider, at a rent of €592 per square metre (€55sq ft). In the same street a broadly similar-sized building owned by Jones Investments is occupied by Stripe, the online payments company founded by brothers John and Patrick Collinson.

The original four-storey office building at Hogan Place was developed some 25 years ago by Seán Reilly, who spent what was then described as a small fortune (€4 million) on making it “cosy and likable”. The decision to use the same site to accommodate the top-quality Sharp Building will have greatly enhanced the returns for McGarrell Reilly.

The fourth-generation block designed by Gary O’Hare of KMD Architects had been expected to run up development costs of about €20 million. It has already transformed the streetscape, featuring a striking contemporary glazed facade, a double-height entrance lobby and the wide appeal of a cafe-deli.

Patrick Campion of HWBC and Peter Flanagan of Knight Frank acted for the McGarrell Reilly Group, while Jonathan Hillyer and Jane Dolan of Cushman & Wakefield represented the purchaser.